Skip to content
Home
/
Do You Know Korean Noodle?

Do You Know Korean Noodle?

The defining characteristic of a noodle is that it’s long. Koreans alike serve noodles at birthdays and weddings for their symbolism - a kind of prayer for longevity in life or marriage. Long, too, is the history of noodles, arising in China 4,000 years ago to eventually spread around the globe.

In the eighth century, Buddhist monks from the Silla Dynasty (57 B.C.-A.D.935) traveled to Tang Dynasty China to study and train. These monks returned with new ideas, including the wheat-flour noodle recipes that had spread in China.
At first, they believed that noodles brought longevity and health, a sentiment that exists today. But most common people did not have the time, energy or resources required to make noodles. Noodles really began to catch on during the Goryeo Dynasty (918-1392) when Mongols introduced buckwheat to the northern region of the peninsula.

Naengmyeon is an iconic

At around this time, the most iconic Korean noodle dish was born: naengmyeon (cold noodles). There were two main regional varieties: Pyongyang and Hamheung. Pyongyang’s terrain and the climate were ideal for buckwheat, so their version of naengmyeon was buckwheat noodles and pickled radish in a chilled dongchimi, or radish kimchi broth. In contrast, Hamheung terrain could not support buckwheat, so sweet potato starch was used. Hamheung naengmyeon was sweet potato noodles covered in a spicy red pepper sauce without any broth. While naengmyeon is a cold dish, people ate naengmyeon during the winter because sweet potato and buckwheat were harvested in the fall and were the freshest during wintertime.

varieties of the world of noodles

Over time, the variety of Korean noodles expanded exponentially. Noodle dishes tailored to regional crops and tastes have created a vast menu.
As the 1950-53 Korean War ended and refugees flocked to the port city of Busan, exchanges between American soldiers and Korean civilians gave birth to mil (wheat) myeon, a form of naengmyeon that used the wheat Americans introduced rather than the traditional buckwheat or sweet potato noodles. And they added chili powder and chili oil to create jjampong. Perhaps the most popular noodle dish in Korea today is jajangmyeon. 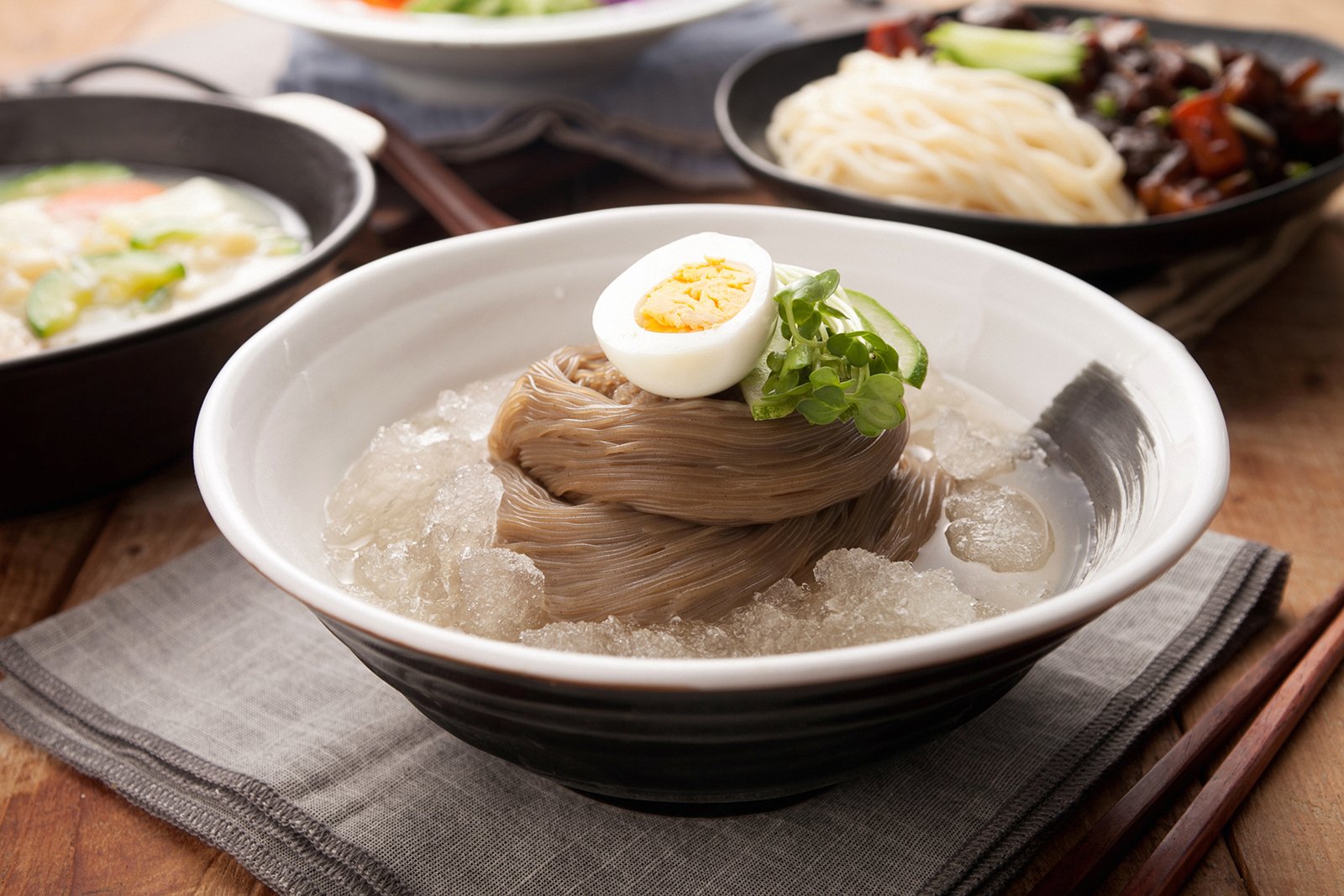 Naengmyeon: Cold noodles generally made of buckwheat or sweet potato starch served in either a chilled dongchimi (radish kimchi broth) with sliced beef and pickled radish, which is called mul naengmyeon, or a sweet and spicy pepper sauce sometimes with raw fish or sliced beef, bibim naengmyeon. Naengmyeon restaurants put scissors, mustard, and vinegar at each table. The scissors are used to cut the incredibly long noodles and make them more manageable. Vinegar and mustard can be added to enhance the flavor. Traditionalists say that the noodles, symbolizing longevity and good health, should not be cut. 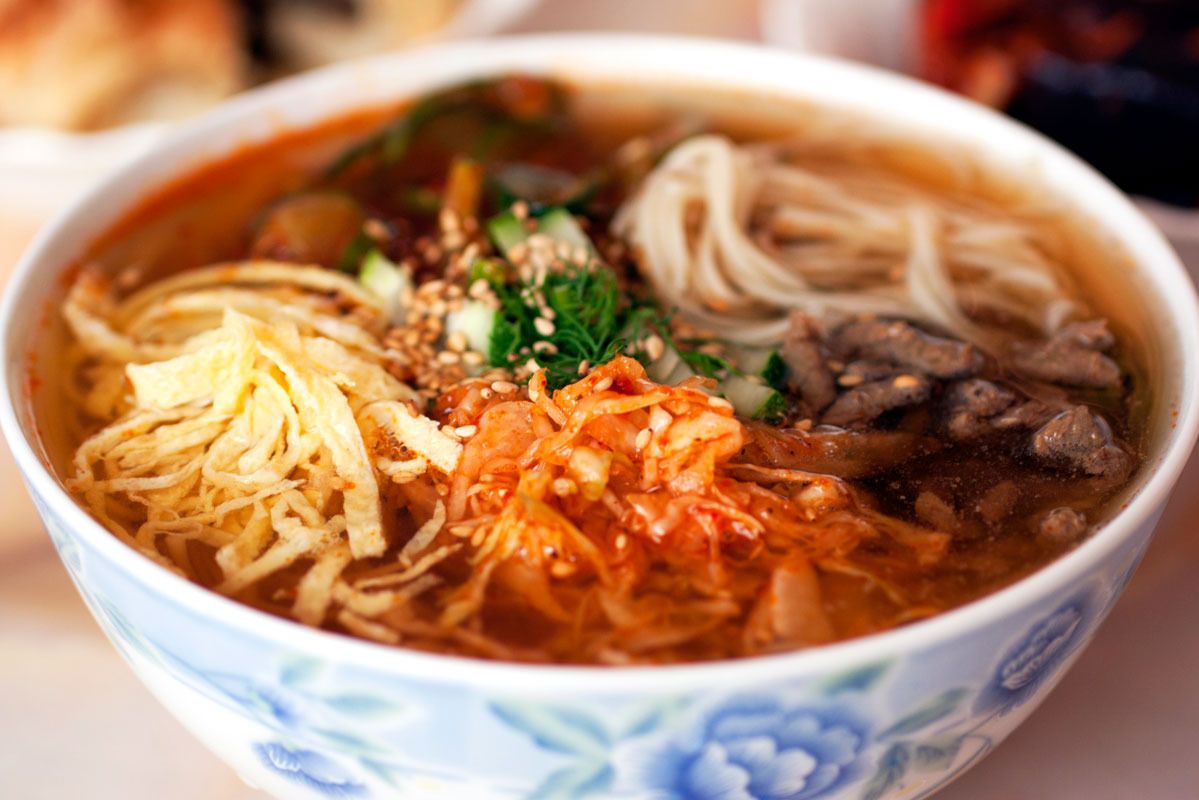 Kimchi-mari guksu: Thin wheat flour noodles are served in a chilled dongchimi broth with chopped kimchi, sliced cucumber, and a boiled egg. This dish is tangy, spicy and refreshing and some say this dish is perfect the morning after a night of drinking. 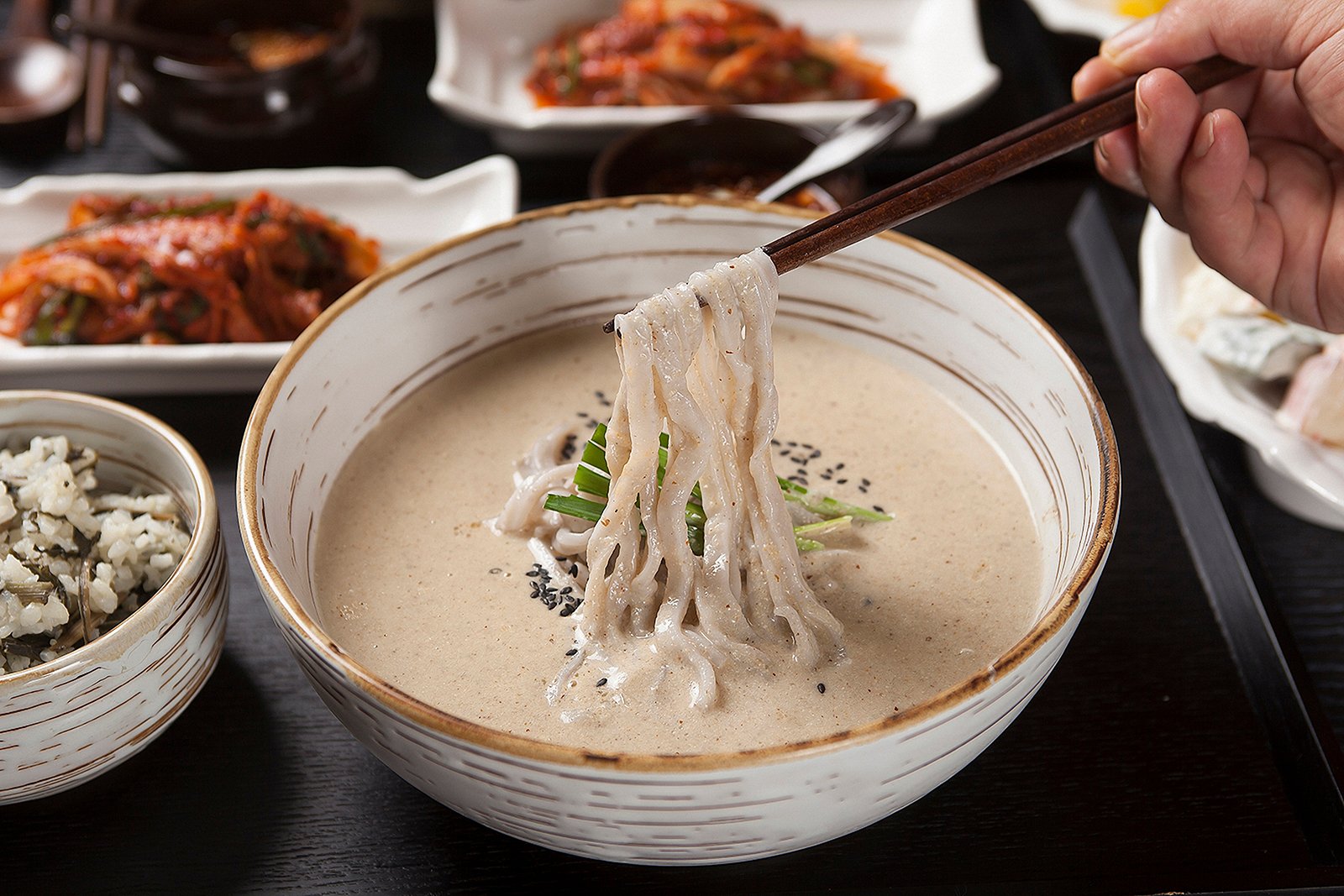 Kongguksu: A noodle dish consisting of thin wheat-flour noodles in a cold soybean broth. The nutrient and protein-rich soybean broth are perfect for humid and sweaty Korean summers. 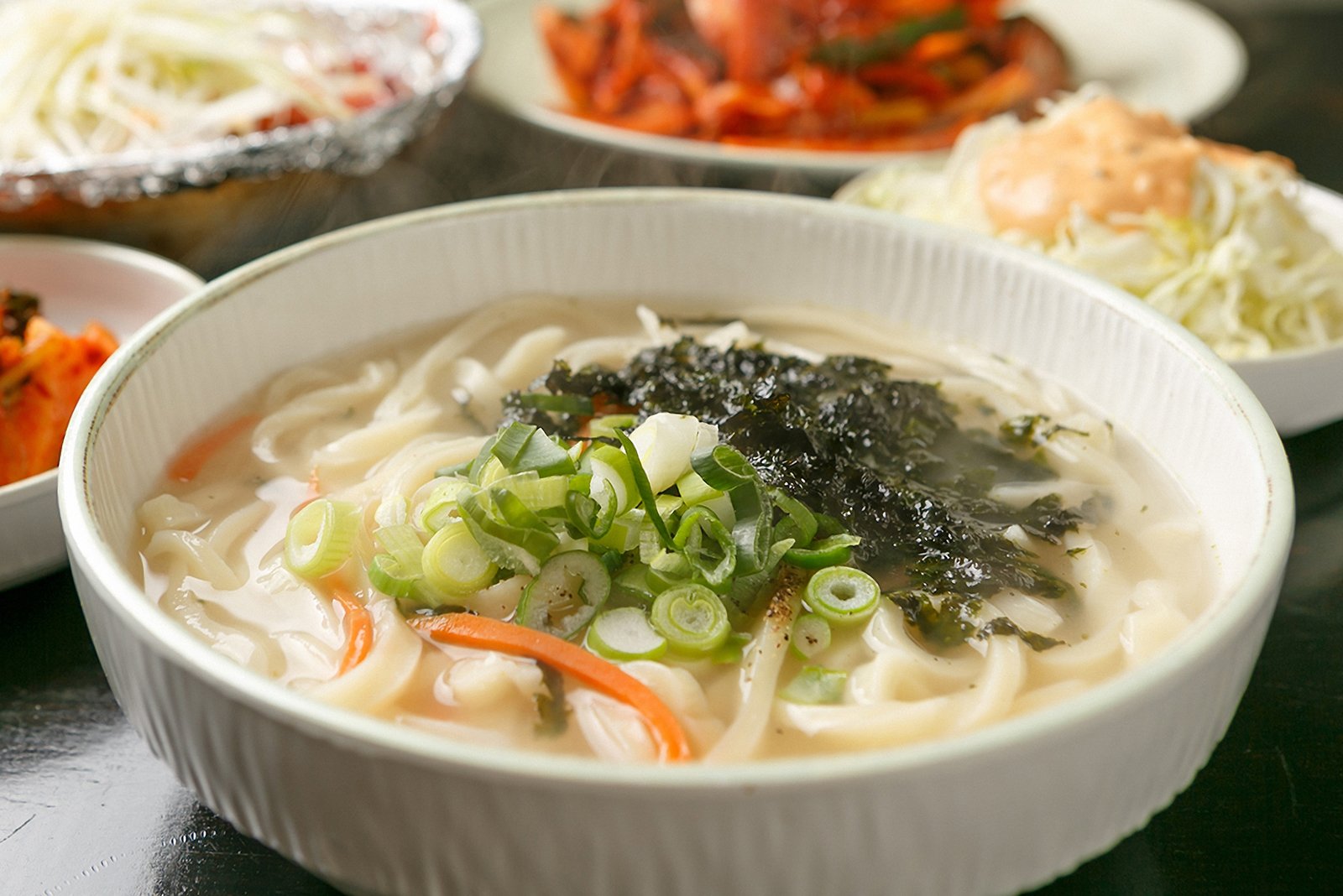 Kalguksu: A warm soup consisting of handmade, knife-cut wheat-flour noodles served in a broth that depends very much on the region. Kalguksu is considered to be a type of soul food in Korea because of its hot and savory broth. 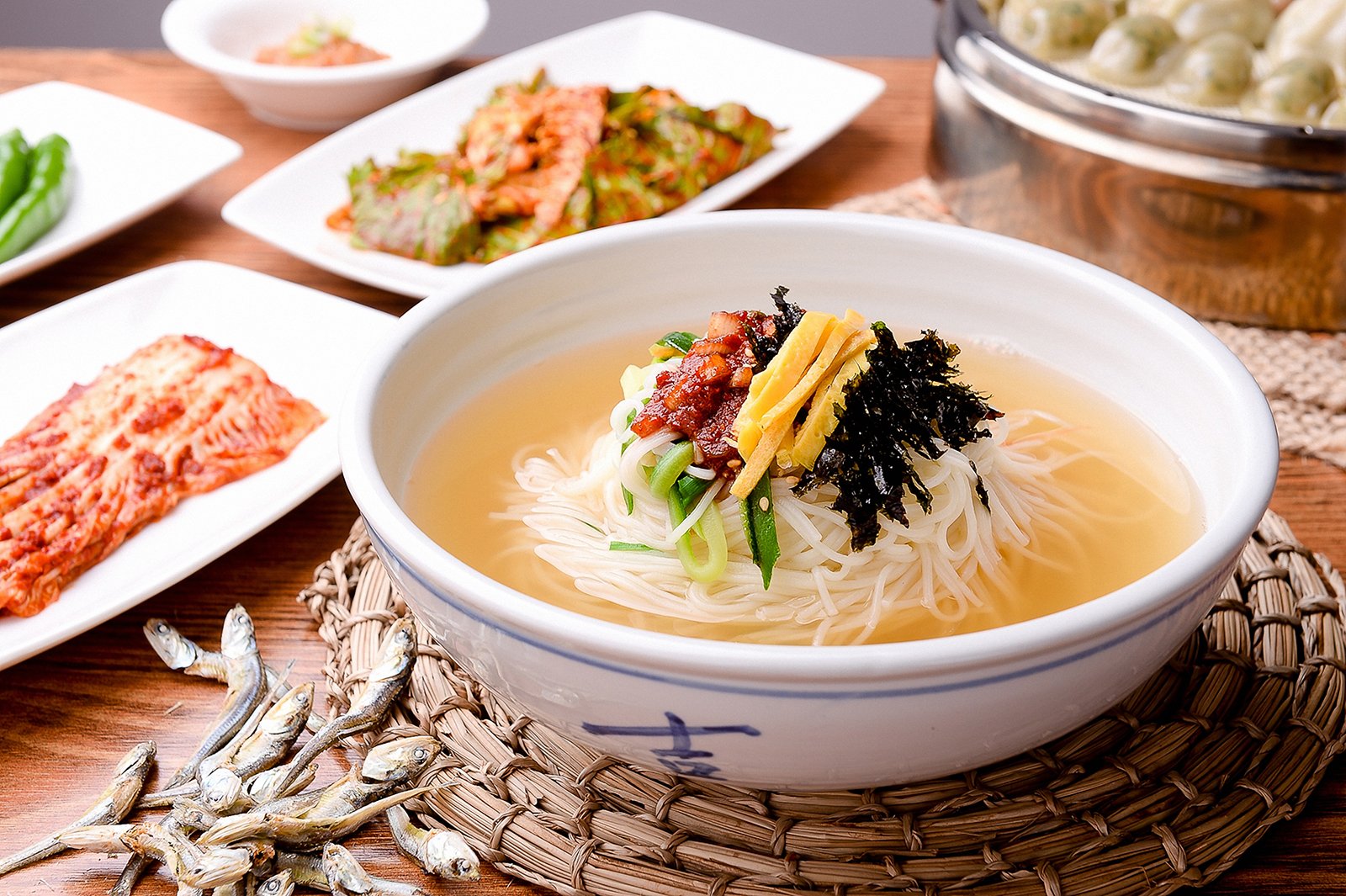 Janchi guksu: A warm noodle dish made of wheat-flour noodles with various vegetables in a clear anchovy or beef-based broth. Janchi means celebration or banquet because janchi guksu is traditionally served at events like birthdays or weddings.
Japchae: A staple of any celebration banquet, this noodle dish is served as a banchan, or side dish, and consists of transparent cellophane noodles made of some form of starch, usually sweet potato starch, stir-fried with vegetables and beef. 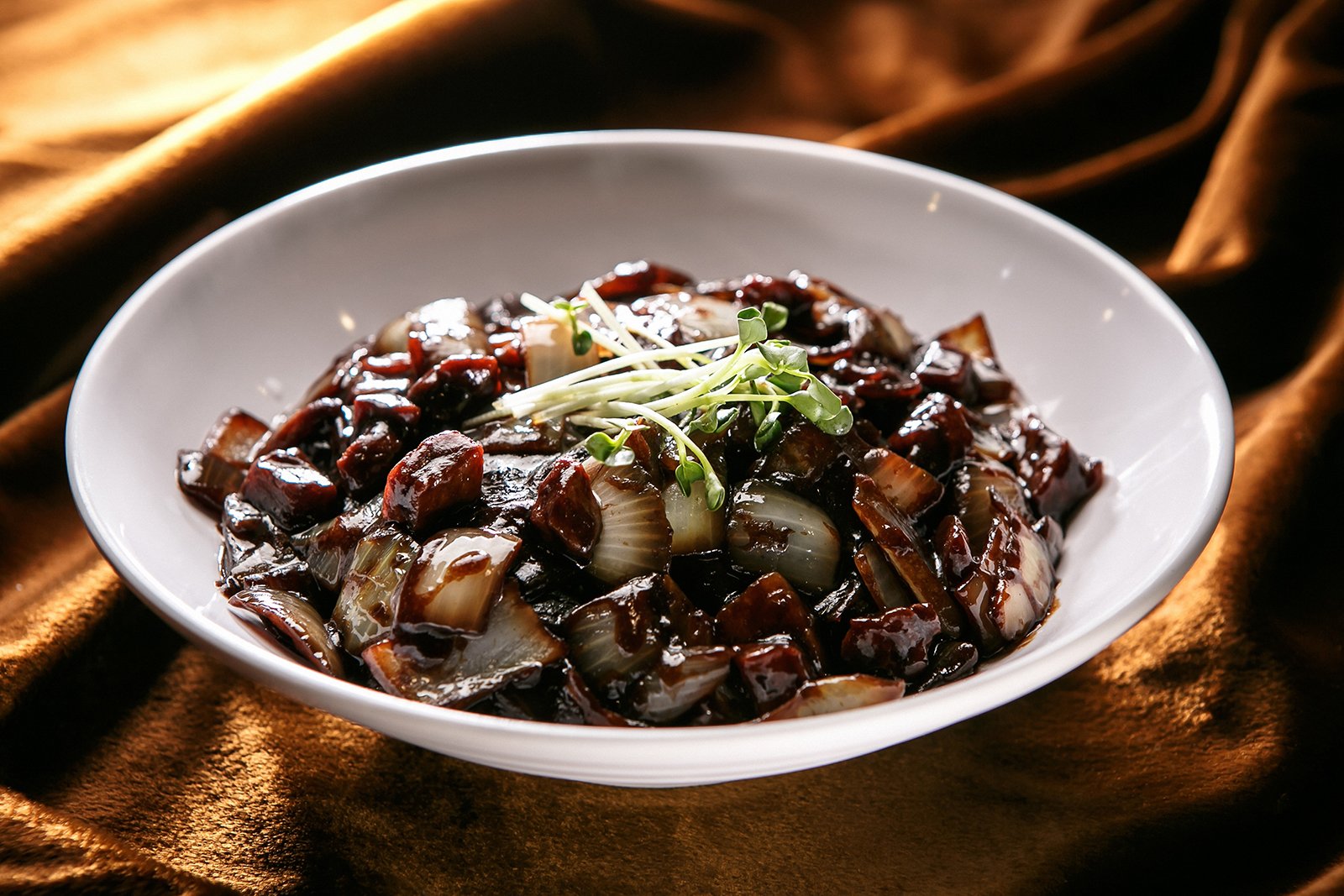 Jjajangmyeon: Originally a noodle dish from Beijing, the Korean version has thick wheat-flour noodles in a black bean sauce with stir-fried vegetables (usually onions) and pork or seafood. 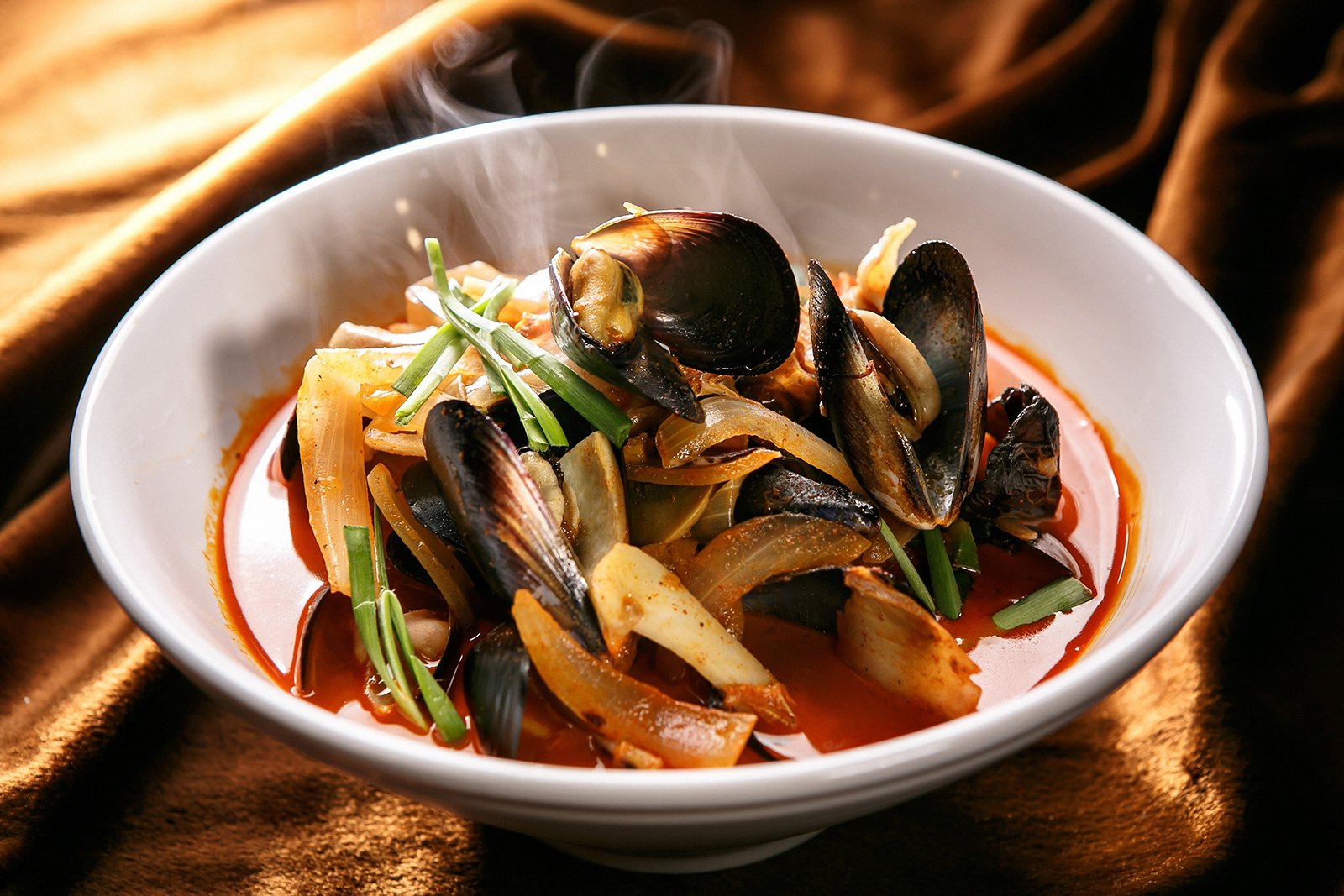 Jjampong: A noodle dish with a complicated history, jjampong combines Chinese egg noodles with a variety of seafood and vegetables in a savory, bright red broth. 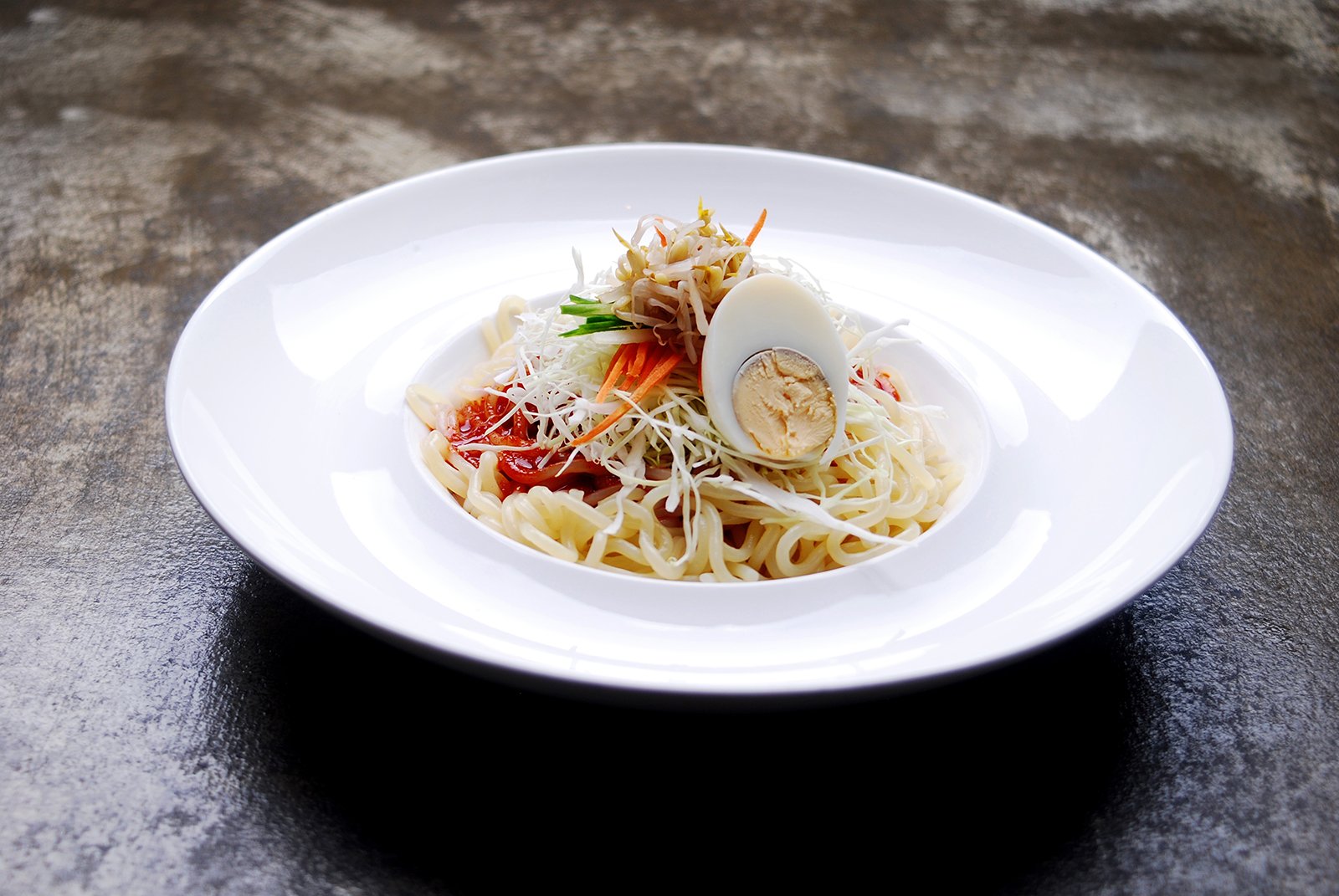 Jjolmyeon: Jjolmyeon is a spicy and sweet noodle dish served with wheat-flour noodles in a chilled red pepper sauce topped with sliced cucumber, seaweed, and a hard-boiled egg.